There will be  no bulk pick up   during the week of January 20th. Recycling will be picked up as regularly scheduled. 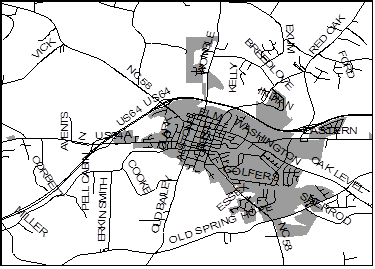 Nash General Hospital is a 282 bed facility that operates as a traditional hospital. The Nash Day Hospital is an outpatient surgery facility with specific centers for cancer treatment and wound care. Coastal Plain Hospital is a 50 bed inpatient facility specializing in comprehensive behavioral treatment. The Aldridge Center is a 23 bed facility for rehabilitation services. There is also an emergency care center operating 38 treatment rooms in the main center and one satellite area. All of these facilities are located in the City of Rocky Mount in the proximity of the US 64 Highway/Winstead Interchange, approximately five to ten minutes east of Nashville. Nashville is also served by Vidant Health and Duke University Health System, two regional health care systems.

The Town of Nashville is served by the Nash-Rocky Mount Public School System. The school district is comprised of Nash County, the City of Rocky Mount, and parts of Edgecombe County. All of Nashville is located in the Nashville Elementary School district. It has an enrollment of approximately 837 students in grades pre-kindergarten through 5th grade. The school is in a residential setting on East Virginia Avenue near the center of Town.

Nash Arts is a private, nonprofit organization, which celebrates, promotes, and produces artists and arts activities, provides support to other area arts organizations and encourages and generates arts education to enhance Nash County quality of life. Nash Arts showcases local, regional and national artists, professional and emerging, as well as self-taught artists and craftsmen. Popular annual events attracting visitors throughout the region include the adapted version of Charles Dickens’ A Christmas Carol, the Haunted by the Arts Ghost Walk, Monthly Concert Series, the Visual Arts Series, Classes and Workshops for children and adults, Dancing with the Arts, Nash County’s Got Talent, and the Denim & Diamonds Gala.

The “Hometown Hero” 5K and one mile program is sponsored by Nashville Elementary  and take place in September each year.  There is also a “Missions Color Run” sponsored by Church on the Rise also in  September.

The Town of Nashville annually offers Halloween activities including face painting and children’s activities at the Library’s annual Fall Festival, a haunted trick-or-treat walking trail at Glover Park, costume contests, and an outdoor movie for all ages during the evening.

Based upon data from the 2010 Census, the Town of Nashville has a population of 5,352. The racial breakdown of the municipality is 51.2% White, 45.5% Black or African American, 1.6% Hispanic or Latino, 0.6% American Indian and Alaska Native, and 0.4% Asian. The median age of the Town of Nashville is 40.1 years. Males represent 46.2% of the population and females represent 53.8% of the population. The occupancy rate of housing units is 93.5% with a vacancy rate of 6.5%. According to 2014 population estimates among individuals over the age of 25, 17.4% have attained at least a bachelor’s degree and 28.9% have attained at least an associate’s degree. The median family income is $64,683 and the median household income is $48,375. According to the Bureau of Labor Statistics, the unemployment rate for all of Nash County stood at 6.3% in April 2017.